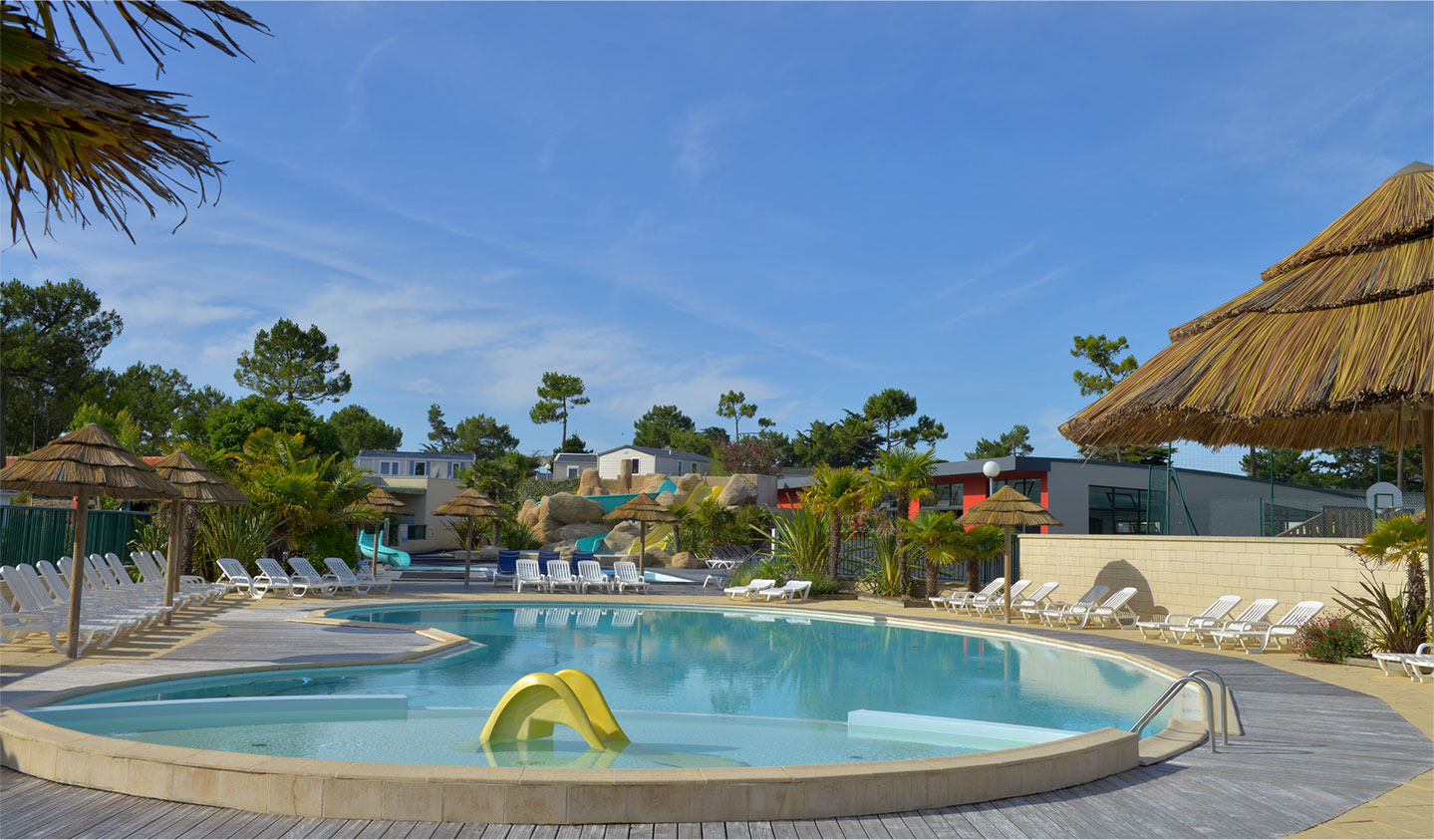 Your 4-star The Tropicana campsite is located not far from Noirmoutier Island, one of the most beautiful islands in the Vendée.
Let yourself be lulled by the sound of the waves and the oceanic climate, and enjoy a timeless day on the island of Noirmoutier!

Before the construction of a bridge democratized its discovery, the island of Noirmoutier was accessible only by a submersible causeway called Passage de Gois.

This small passage was an arm of land, a road that linked the mainland to the island of Noirmoutier, for the more adventurous tourists, and to import goods and food to the island.

However, the Bay of Biscay can be capricious. During high tides, the Gois passage is submerged, making access to the island impossible.

To overcome this problem, a bridge was built in 1971, allowing the passage of cars. And built high up on the sea, it makes access to the island possible in all circumstances, even at high tide!

The culture specific to the island of Noirmoutier

Even if tourism is the first economic activity of the island of Noirmoutier since the construction of the bridge which connects it to the mainland, the interest of the island does not stop at beautiful landscapes!

Noirmoutier does indeed have other assets, such as the cultivation of Bonnotte , which is a potato enriched with seaweed. Oyster farming , farming, the production of sea salts, bouchots (culture of mussels) and of course fishing are also its undeniable strengths.

As you walk on the island of Noirmoutier, you change the atmosphere as you travel the kilometers! Discover all the cultural splendor of the island by exploring it from top to bottom, 25 kilometers on foot or by bike.

Beaches to die for

Noirmoutier is not just a culture. You can visit in the morning, but after lunch, when the sun is beating down and is softened by a typical breeze from the ocean , it’s time to hit the beach!

Surrounded by the Atlantic Ocean, the island of Noirmoutier leaves you spoiled for choice in terms of fine sandy beaches.

Bask quietly in the shade of your parasol, then once the sun is softer, stroll among the many sand dunes and salt marshes at La Guérinière and at l’Epine, before going for a drink. glass on the terrace. What to spend an unforgettable day, in an idyllic living environment!

Various and varied places of interest

Each of the 4 towns of Noirmoutier Island reflects the multiple aspects of the island’s personality. Between vestiges, monuments of the past, salt marshes and urbanized city, discover the entirety of a warm and welcoming island!

The historic capital Noirmoutier-en-île brings together vestiges of striking beauty: the Saint-Philbert church, the former Blanche abbey, the castle, the Jacobsen hotel … Immerse yourself in the history of the island!

The village of Barbâtre constitutes the urbanized part of the island, in which you can mingle with the daily life of the locals. On the contrary, the Bourg du Vieil, as its name suggests, has retained a much more typical and preserved character.

Beyond the dunes, sandy beaches and salt marshes, the island of Noirmoutier is full of sublime landscapes. In particular a protected natural forest , which is based on three towns at the same time.

Lose yourself in the immensity of this forest with refreshing scents , and let yourself be lulled by the sound of the wind in the trees, and of the waves that wash up not far on the beach.

All around you, the typical flora and fauna of an island in the Vendée stirs quietly, without hurrying.

Come to the charming island of Noirmoutier, for a warm stay that has been rocking the creativity of all artists, writers and painters, for decades! 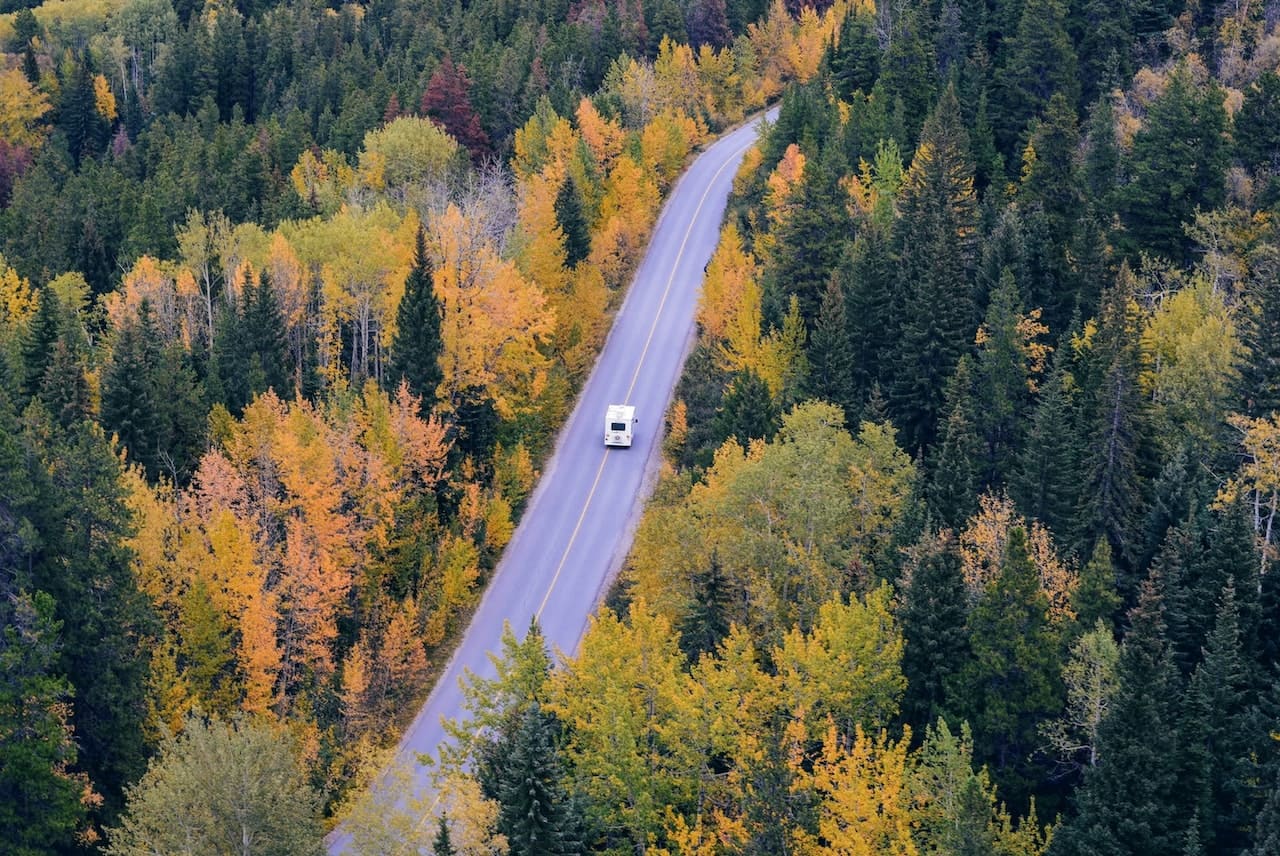 Our itinerary for visiting the Vendée by motorhome

Do you want to visit the Vendée in a motorhome? Discover all the activities not to be missed during your stay! 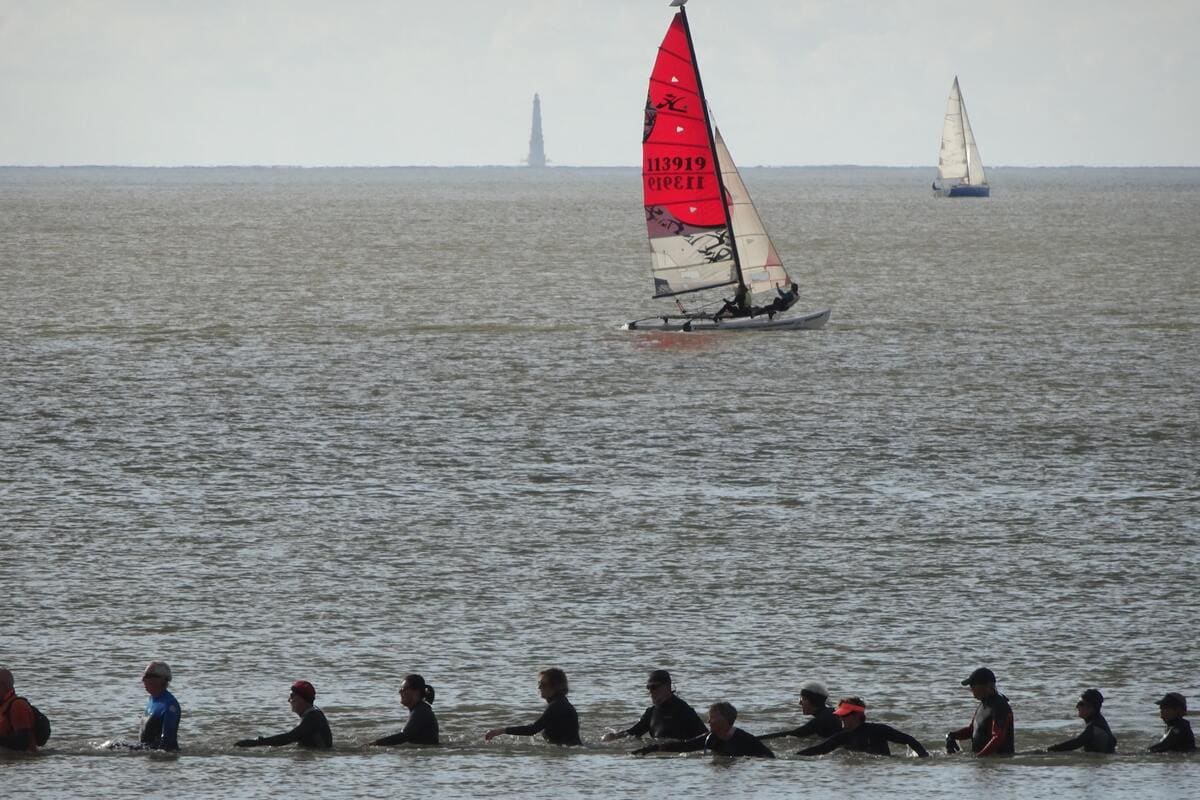 The best longe-côte spots in Vendée

Would you like to go along the coast in Vendée? Your campsite Le Tropicana gives you all the information on the spots not to be missed! 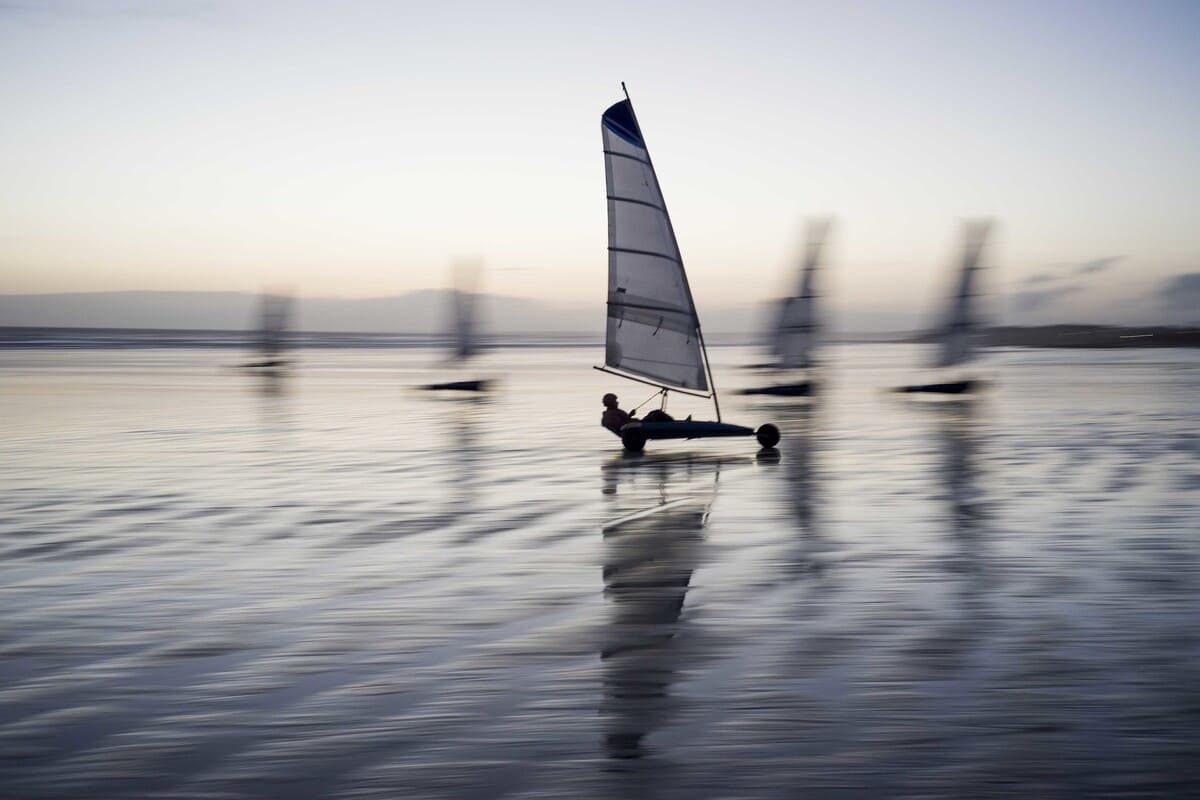 Must-do experiences in spring in Vendée

Between the good weather and the chirping of birds, you always have to wonder what to do in Vendée in the spring. Unparalleled activities! 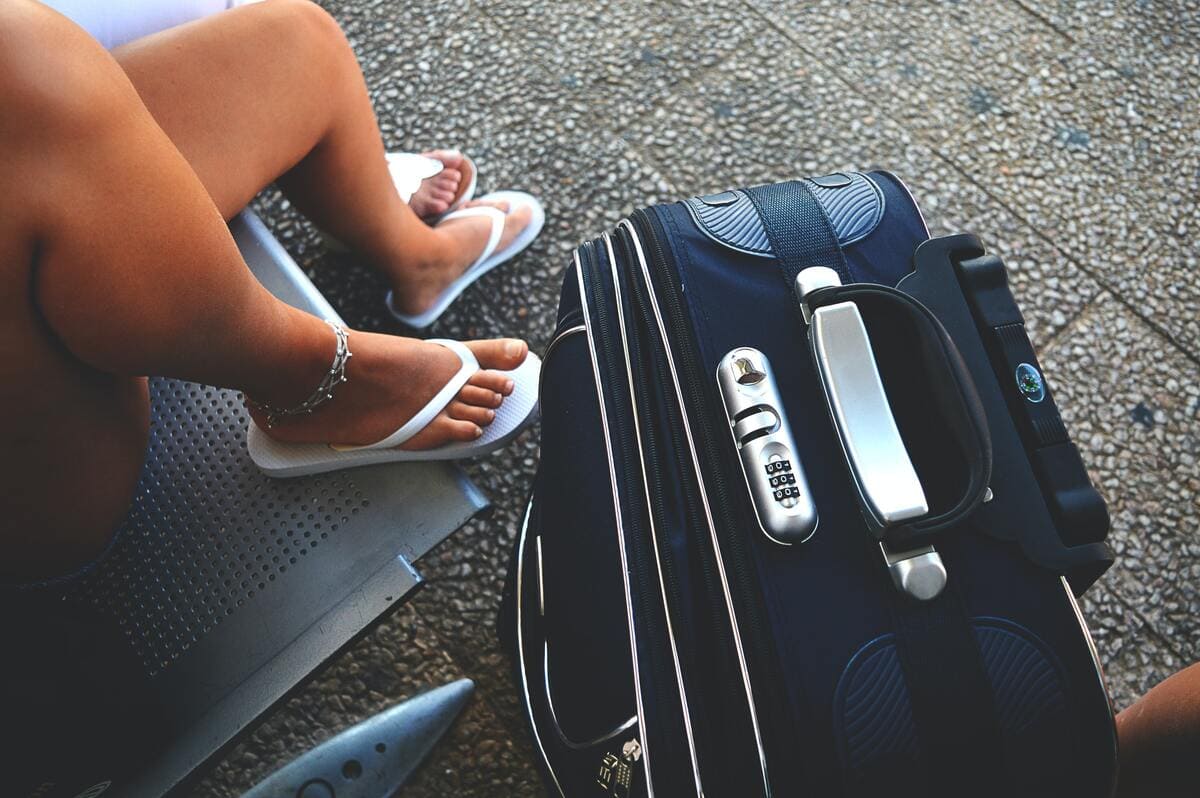 When should you go on holiday in Vendée?

Going on holiday in the Vendée is an option of choice. You enjoy sublime landscapes, and you discover a sublime Vendée with 4 seasons.

See all other articles
NOTES & ADVICE

For any request, you can contact the reception who will be happy to provide you with information at the following times :

You can find out more about which cookies we are using or switch them off in settings.

This website uses cookies so that we can provide you with the best user experience possible. Cookie information is stored in your browser and performs functions such as recognising you when you return to our website and helping our team to understand which sections of the website you find most interesting and useful.

Strictly Necessary Cookie should be enabled at all times so that we can save your preferences for cookie settings.

If you disable this cookie, we will not be able to save your preferences. This means that every time you visit this website you will need to enable or disable cookies again.